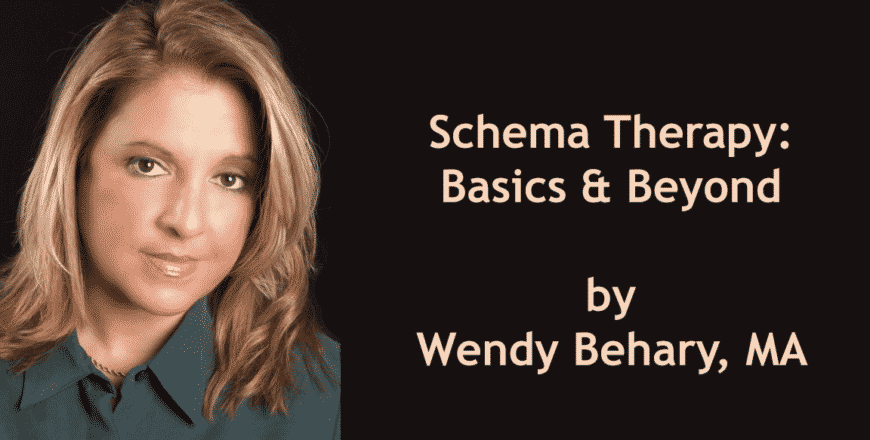 Wendy Behary presents an overview on the use of Schema Therapy.

Technical Overview: This webinar is a recording of a previously held event. The video displays the slides/screenshare presented during the webinar, and the audio consists of the narration and dialogue by the host and presenter(s). (Note: the speakers are only heard and not seen in this recording)

Schema therapy is particularly well-suited for difficult, resistant clients with entrenched, chronic psychological disorders, including personality disorders (such as BPD and narcissism), eating disorders, intractable relationship problems, and criminal offenders. It is also effective for relapse prevention in depression, anxiety, and substance abuse. The results of a major comparative outcome study have shown schema therapy to be highly effective with a large percentage of outpatients with Borderline Personality Disorder, with a low dropout rate. Clients who have spent years gaining valuable insight with psychodynamic treatments, but who are frustrated by their lack of progress, often respond well to the active, systematic, flexible, and depth-oriented schema approach.

Topics covered in this webinar:

With 25 years post-graduate training and advanced level certifications, Wendy Behary is the founder and director of The Cognitive Therapy Center of New Jersey and The New Jersey Institute for Schema Therapy. She has been treating clients, training professionals and supervising psychotherapists for more than 20 years.

Wendy was on the faculty of the Cognitive Therapy Center and Schema Therapy Institute of New York (until merging in 2012 with the NJ Institute), where she trained and worked with Dr. Jeffrey Young since 1989. She is a distinguished founding fellow and consulting supervisor for The Academy of Cognitive Therapy (Aaron T. Beck Institute).Wendy served as the President of the Executive Board of the International Society of Schema Therapy (ISST) from 2010-2014, and is currently the chair of the Brainstorming Sub-Committee for the ISST.

Wendy Behary has co-authored several chapters and articles on Schema Therapy and Cognitive Therapy. She is the author of “Disarming the Narcissist…Surviving and Thriving with the Self-Absorbed” (New Harbinger, 2008 and 2013). Wendy has a specialty in treating narcissists and the people who live with and deal with them. As an author and an expert on the subject of narcissism, she is a contributing chapter author of several chapters on schema therapy for narcissism for professional readers. She lectures both nationally and internationally to professional and general audiences on schema therapy, and the subject of narcissism, relationships, and dealing with difficult people. Her work with industry has included speaking engagements focused on interpersonal conflict resolution.Her private practice is primarily devoted to treating narcissists, partners/people dealing with them, parenting issues, and couples experiencing relationship problems. She is also an expert in coaching individuals in interviewing, public speaking, and interpersonal skills enhancement.

Be the first to add a review.